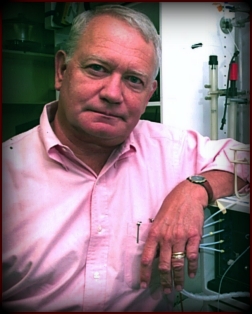 Genetics Institute member Robert Cousins, Boston Family Professor of Nutrition and director of the Center for Nutritional Studies in the Institute of Food and Agricultural Sciences, was recently named a Fellow of the American Association for the Advancement of Science (AAAS).

Fellows are selected and honored each year from current AAAS members by their peers to recognize their efforts to advance science or its applications. This year’s 401 fellows were honored for contributions to the 24 sections of AAAS, which has named fellows since 1874. Cousins and all selected 2014 fellows will be celebrated at the 2015 AAAS Annual Meeting on February 14.

Cousins’ area of nutrition science is molecular nutrition with a focus on zinc that functions as a signaling molecule in cells. His lab seeks to understand both the role of this micronutrient to maintain good health as well as how abnormal zinc metabolism and utilization can produce altered cell functions and contribute to diseases such as metabolic syndrome, diabetes and cancer.

As a graduate student, Cousins entered the biological sciences during a time of major breakthroughs in molecular biology. Monumental steps were made in understanding the basic mechanisms of action of estrogen, corticosteroids and other molecules on gene expression.

“This background influenced my future research in nutrition as I hypothesized many nutrients had similar effects on gene expression,” said Cousins.

Research in nutrition is applicable to both human and animal health, an aspect of the field that appealed to Cousins. During an assistantship that took a basic science approach to nutrition studies, he appreciated the broad application of nutrition research and its wide public interest.

Working at the University of Florida has provided a productive academic atmosphere, said Cousins. Genetics research at the university is approached through an all-inclusive program, with activities ranging from molecular studies on the genome to applied studies with animals and plants.

Looking to where the field of nutrition is heading, Cousins expects advances in diet and health.

“Functional genomics and research on genomic makeup of an individual will define how we approach diet and health issues from a more advance knowledge base in the future,” Cousins said.

In addition to his membership and fellow selection with the AAAS, Cousins is an elected member of the National Academy of Sciences, an honorific society of scholars elected for distinguished and continuing achievements in original research. Cousins is one of fourteen UF faculty elected to join the Academy’s approximate 2,000 members, one of the highest honors that can be accorded a scientist or engineer.