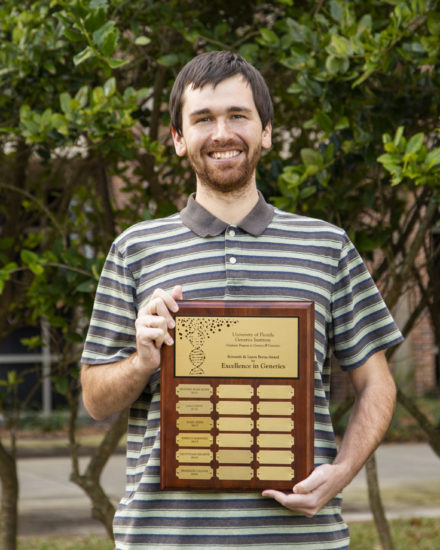 Brandon Califar, Genetics Genomics Student and the winner of the 2020 Kenneth & Laura Berns Award for Excellence in Genetics.

The 2021 edition of U.S. News and World Report ranked the University of Florida as the 6th-best public university in the United States, and 30th overall among all national universities, public and private.

The University of Florida is one of the nation’s largest research universities. It contributed $16.9 billion to Florida’s economy and was responsible for over 130,000 jobs in the 2017–18 fiscal year (2019). Some 50 biotechnology companies have resulted from UF faculty research programs; additionally, the Milken Institute named UF one of the top-five U.S. institutions in the transfer of biotechnology research to the marketplace (2019). UF ranked No. 15 in the world for number of patents with 115 patents granted during the 2019 fiscal year (2019). The Institute of Food and Agricultural Sciences (IFAS) is ranked No. 25 by the National Science Foundation in Research and Development (2017). In addition, many of the University of Florida’s graduate schools have also received top-50 national rankings from U.S. News and World Report.

The University of Florida spent over $900 million on research and development in 2020, breaking its previous record and ranking it one of the highest amounts in the nation. More than $750 million in new research facilities have recently been completed or are under construction, including the Nanoscale Research Facility, the Pathogens Research Facility, and the Biomedical Sciences Building.

Additionally, Innovation Square, a 24/7 live/work/play research environment, was recently developed along Southwest Second Avenue between the University of Florida campus and downtown Gainesville. The university’s Office of Technology Licensing is now located in Innovation Square, joining the Florida Innovation Hub, a business super-incubator designed to promote the development of new high-tech companies based on the university’s research programs.

Awards won by University of Florida faculty members include a Fields Medal, numerous Pulitzer Prizes, NASA‘s top award for research, and the Smithsonian Institution’s conservation award. There are currently more than sixty eminent scholar endowed faculty chairs, and more than fifty faculty elections to the National Academy of Sciences, Engineering, or Arts and Sciences, the Institute of Medicine, or a counterpart in a foreign nation. More than two dozen faculty are members of the National Academies of Science and Engineering and the Institute of Medicine or counterpart in a foreign nation.