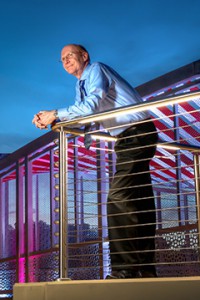 Dr. Concannon received both his B.A. and Ph.D. in Biology from University of California Los Angeles. He carried out postdoctoral research at the California Institute of Technology in the laboratory of Dr. Leroy Hood. From 1987 to 2006 he was a faculty member at the Benaroya Research Institute, where he served as both Genetics Program director and Associate Institute Director, as well as being an affiliate faculty member of the University of Washington. In 2006 he moved to the University of Virginia where he held the Harrison Distinguished Teaching Chair in Biochemistry and Molecular Genetics and served as the Associate Director for the Center for Public Health Genomics. Dr. Concannon’s work has resulted in more than 200 peer-reviewed papers in top journals, including Nature, the Journal of the American Medical Association, The New England Journal of Medicine and the Proceedings of the National Academy of Sciences. He has also authored more than 40 book chapters, reviews and invited publications, and given scores of invited presentations in many countries including Spain, Italy, Norway, Finland, Denmark, the Czech Republic, South Korea, Japan, Australia, Brazil, Canada, and the United States.

His research focuses on complex genetic disorders and gene-environment interactions, including studies of inherited disorders characterized by radiation hypersensitivity, second primary breast cancer and its interaction with radiation therapy, and genetic risk for type 1 diabetes. He has had continuous National Institutes of Health (NIH) funding for these studies for more than 25 years as well as support from a number of private research foundations. Dr. Concannon has served as a standing member of multiple NIH study sections and numerous foundation study sections as well as on scientific advisory panels for the NIH and the Veteran’s Administration. See here for a listing of his scholarly publications.