On April 12th, the UFGI welcomed over 70 people to a virtual showcase of graduate student research. Over 11 departments from 3 colleges were represented, with presentation topics ranging from agronomy to physics. This was the first major event hosted by the UFGI since quarantine began roughly the same time last year. Presenters were allowed three minutes each to explain their research and all attendees were given the opportunity to vote on their favorite presenter.

A highlight of the event was the keynote provided by Vence Bonham Jr, J.D. from the National Institutes of Health entitled, “Maximizing the Usability of Genomics for All”. He is the Senior Advisor to the National Human Genome Research Institute (NHGRI) Director on Genomics and Health Disparities and an Associate Investigator in the Social and Behavioral Research Branch of the NHGRI. His research interests include the benefits and barriers of comprehensive genomic healthcare and the interplay of social, economic, and environmental risks on diseases.

One step in this pathway to equity is increasing representation of diverse populations in genomic studies. This has many benefits such as increasing the ability for researchers to understand genomic contributions to diseases like sickle cell disease, a particular area of interest to Mr. Bonham, which are historically underrepresented in research. The current lack of diversity in genomic databases is a barrier to translating precision medicine research into practice. In genome wide association studies (GWAS), the majority of the genetic samples are European ancestry, and thus do not speak to the true breadth of human genomic diversity. This lack of genomic data reduces genetic researchers’ ability to investigate health disparities, but can be remedied in time by making conscious efforts to include a wider variety of individuals in the research process.

Although diversity in genomic data is important to the role of genomics in the promotion of health equity, workforce diversity within research is just as critical. More diversity among the genetics workforce can lead to more inclusive scientific discoveries and thus benefit more people. Mr. Bonham discussed that as more individuals from underrepresented groups become researchers, scientists, and clinicians, their unique perspectives become invaluable for healthcare issues affecting their communities.

Scientific fields have slowly diversified over time. Taking an active, conscientious role to make this shift happen, however, will better benefit the health and wellbeing of our species in the long term. Diverse teams can tackle complicated problems faster than less diverse teams. The same can be said for solving complex issues in genetics and genomics. To encourage this, Mr. Bonham recommended reading “Enhancing Diversity in the Biomedical Research Workforce,” a guide to inclusively opening up academic opportunities for people of various backgrounds.

In addition to promoting a diverse workforce in genomics, Mr. Bonham also discussed engagement with the public as critical to the mission of health equity. He stated that “taking a similar approach within medicine and health policy will reduce healthcare disparities.” Engaging the public to ensure all members can access information on genetics in the context of their wellbeing will lead to a more informed and ultimately healthier public. For more information on NHGRI’s plans to address diversity in the near future, Mr. Bonham recommends reading the recently published, “Strategic vision for improving human health at the forefront of genomics”. 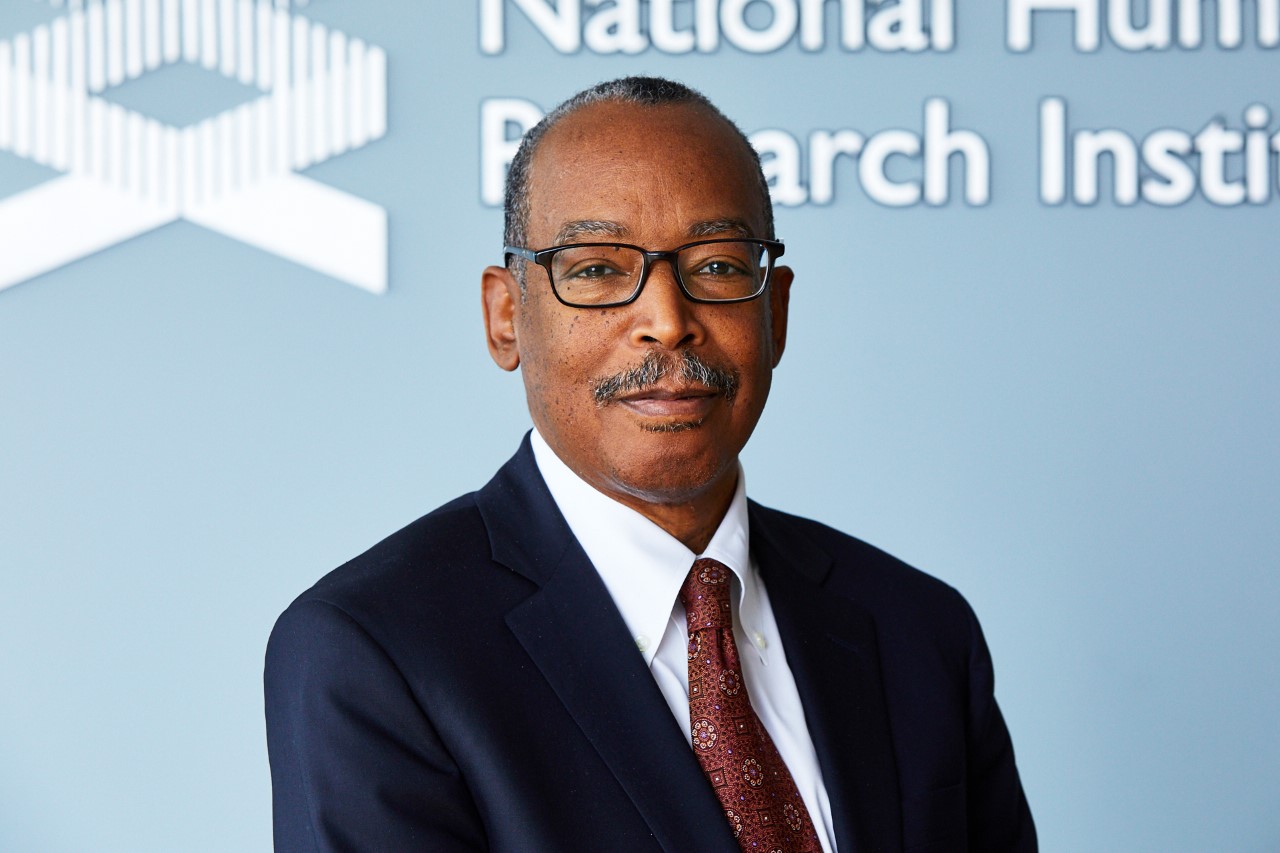 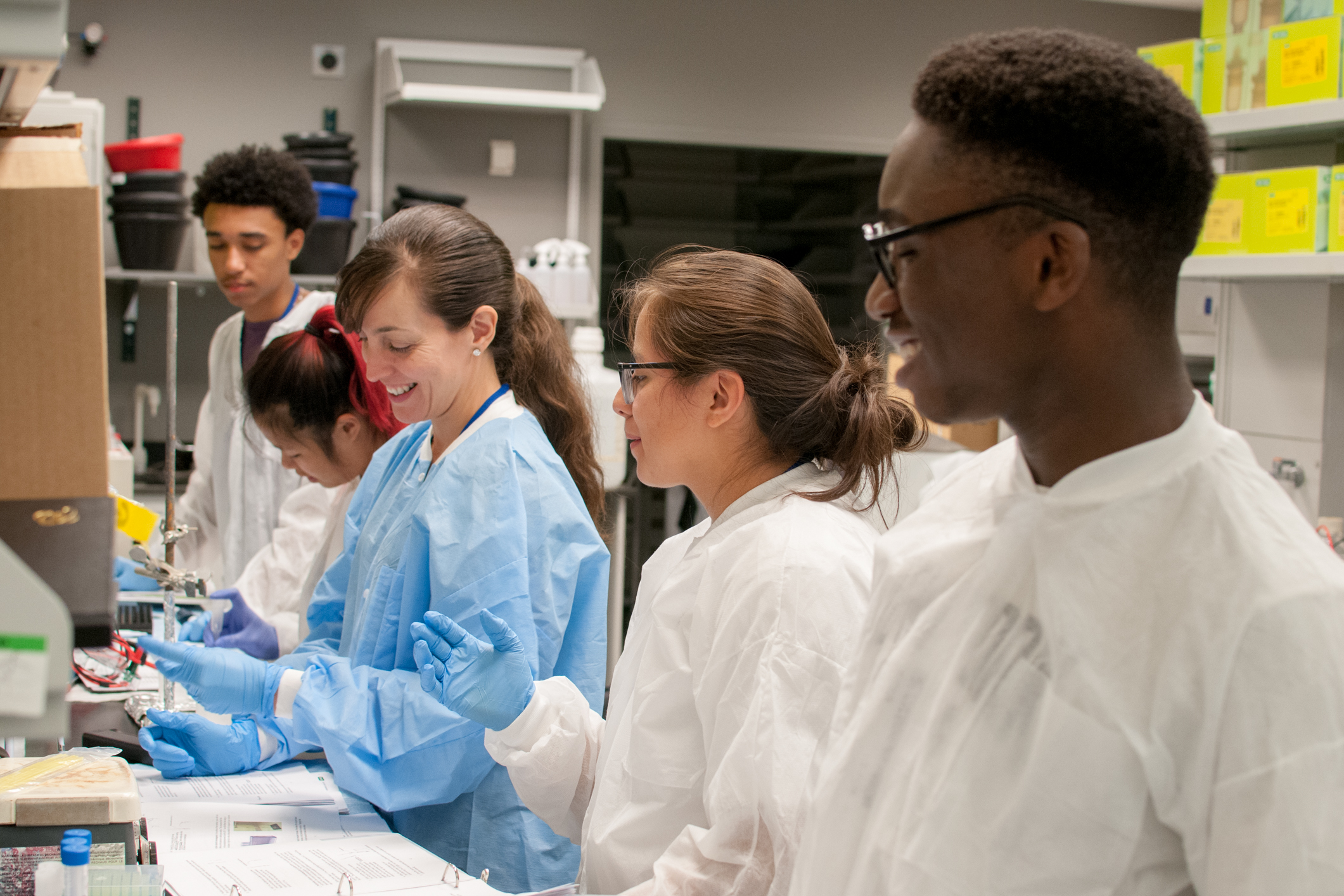 HiSTEP students working in the lab beside one of their postdoc mentors (in blue). HiSTEP is the NIH’s High School Scientific Training and Enrichment Program, aimed at increasing the number of students interested in biomedical and healthcare careers in college. 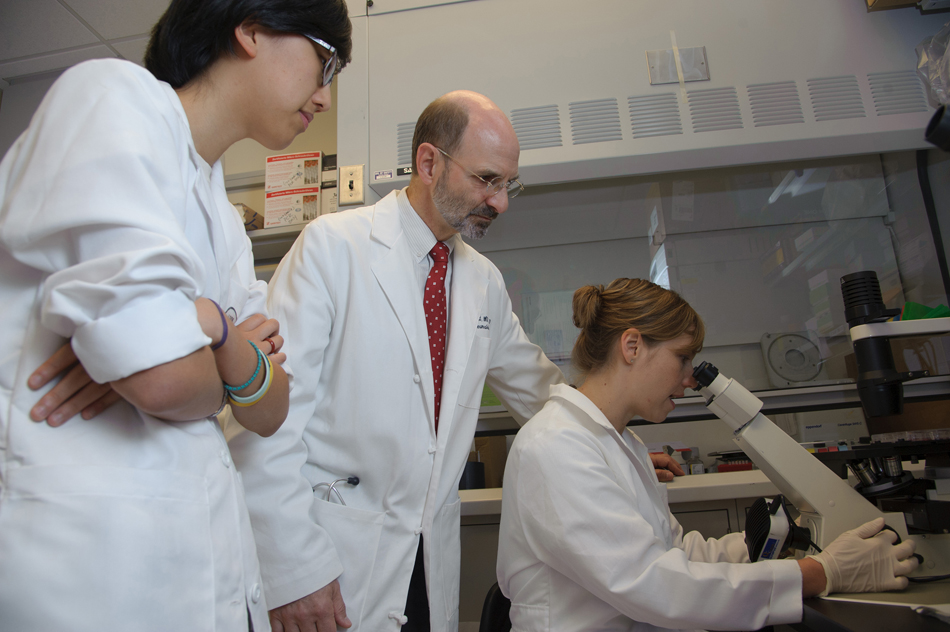 In the same way that a species’ genetic diversity can allow for its biological strength, diversity in genomic data and research leadership will benefit the long-term health of the human species. Mr. Bonham lauded the benefits of genomics in healthcare being accessible to all. If the advances of science are not available to everyone who can benefit from them, he questioned, “what’s the point?”

Moving forward, he hopes to see the regular use of genomics transition from boutique to mainstream in all areas of healthcare. Genomic variants will be readily analyzed and classified thanks to a diverse, deep pool of genetic data from which genetic contributions to an individual’s health can be drawn.

Additionally, the improvement of genomic educational opportunities for historically underrepresented groups will lead to a diversified genomic workforce. This workforce will be able to approach complex issues from more directions than ever before, and will help drive research into the future.

“The promise of genomics cannot be fully achieved unless the field is diverse in results… We must strive for global diversity in all aspects of genomic research.” ∎