When Gatorade was created, all the coaches wanted was something to keep their players out of the infirmary during summer training sessions. No matter how much water they gave them, they were no match for the brutal Florida summer heat and humidity.

When the researchers finally handed them the results of their research, the coaches were shocked by the difference the citrus-flavored beverage made.

In the 50 years since its development, Gatorade has gone on to do so much more than merely propel athletes on the practice field.

Gatorade royalties are distributed to many departments at the University of Florida to help fund their operations. The Genetics Institute uses its share of these funds to support its graduate program.

“I think for such a small program, it has an out-sized effect,” said Graduate Program Co-Director John Davis. “We’ve had some amazing students come out of what is still a relatively new, small program.”

The UFGI grad program was established in 2007, and only accepts about half-a-dozen students each year. But the few they do accept have done some remarkable things. 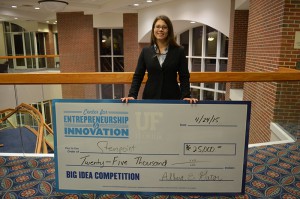 The competition came along right as she was looking at starting a business based on research that came out of one of her side-projects. Unfortunately, neither she nor her PI had the funds to get it going, and they were reluctant to take out a loan.

One morning she opened an email advertising the contest.

“When I saw that I thought it was exactly what I wanted to do,” Salazar said.

After she graduates this winter, she plans to transition to running the business– Stem Point– which provides stem cell isolation and banking for veterinary purposes. They harvest stem cells directly from blood, which she claims no other company does.

During her time at the UFGI, she appreciated the interdisciplinary exposure to a wide range of disciplines, and the professional development seminars that discussed career options outside of academia.

“It definitely opened some doors,” she said. “Through interaction with other students and what they were doing, that’s kind of how I ended up in some of the stem cell courses that were optional. And that’s how I realized I was interested in the field. It more or less shaped what I would do for my PhD.”

Gatorade has done more than support the program that helped Salazar launch her career.

“It was my go-to drink when I used to do sports in high school,” she said.

She chugged bottle after bottle of the lime cucumber flavor while playing soccer.

The graduate program directors are pleased with how the work by the students reflects the changing trajectory of science.

“We’ve got really, really good and interesting and diverse and fun students,” said Co-Director Connie Mulligan, “and it’s nice working in a small program where you feel the effect you have.” 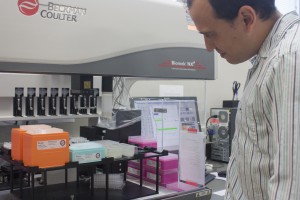 It’s easy to be proud when you have students founding companies and receiving prestigious scholarships, all while pursuing PhDs. One even won a photo contest, and had her image of an embryonic skate displayed in Science and at the National Institute of Health.

Marcio Resende, class of ’14 alumnus, started his own company while also pursuing a PhD. Now interim CEO, during his second year, he, along with two other researchers, founded a genetics research company called RAPiD Genomics.

The company serves breeders and researchers by reducing the complexity of the genome– making it easier to sequence and characterize the reduced portions of the genome.

“One of the core things for the development of the company was the patent which we co-invented, and that was created in a lab here,” Resende said. “That, by itself, was key for the success of the company.”

He noted that UF’s culture of innovation creates further opportunities for other developers. He mentioned RTI Surgical, which began as a Gainesville start-up, and eventually became so successful it was able to help fund the building of the Cancer & Genetics Research Complex where the UFGI is housed.