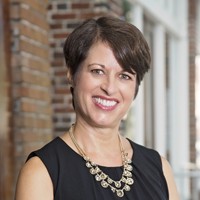 Julie Johnson, Pharm.D., dean of the University of Florida College of Pharmacy, will be honored next week with the top research award presented by the American Association of Colleges of Pharmacy, or AACP.

The Volwiler Research Achievement Award recognizes Johnson for her contributions to the field of pharmacogenomics, the study of how genes affect a person’s response to drugs. Johnson, also a distinguished professor in the UF College of Pharmacy and UF College of Medicine, will receive the honor during the AACP annual meeting in Anaheim, California, on July 25.

“The Volwiler Research Achievement Award is an incredibly prestigious honor, and I am grateful to be this year’s recipient,” Johnson said. “The award is especially meaningful because it represents recognition from my peers for my research accomplishments at the University of Florida and beyond.”

Johnson has secured nearly $40 million in funding, written more than 250 original articles and was named a 2015 Thomson Reuters Highly Cited Scientist for being among the top 1 percent of cited authors in pharmacology and toxicology. She is one of a select group of pharmacists to be elected to the prestigious Institute of Medicine, now known as the National Academy of Medicine. In addition, she is serving as president of the American Society of Clinical Pharmacology and Therapeutics in 2016.

“Dean Johnson represents the best of academic pharmacy research, and she has made a significant impact on the health and wellness of many Americans through her pharmacogenomics studies,” said Lucinda L. Maine, Ph.D., R.Ph, AACP executive vice president and CEO. “She joins the ranks of many of esteemed pharmacy researchers who have won the Volwiler award.”

The Volwiler Research Achievement Award was established in 1977 as the top research prize in academic pharmacy to honor the late Ernest H. Volwiler, former president and research director of Abbott Laboratories. The annual award recognizes an individual within the ranks of pharmacy education recognized by his or her peers as one of the leading researchers in a given area of the pharmaceutical and clinical sciences.