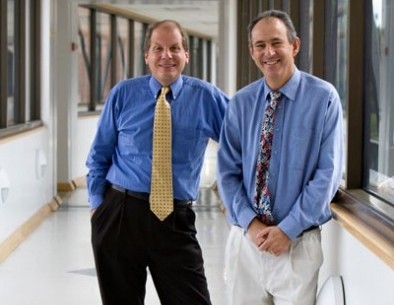 “Being on this list is testament to the national and international recognition and leadership of both the Type 1 diabetes program at UF and the individuals involved with it,” Schatz said.

Expertscape considered nearly 60,000 researchers from around the world in the list. In additional, UF was named the fifth top institution for Type 1 diabetes research.

To determine rankings, Expertscape’s analysis considers the number of researcher’s publications, quality of journals that published each article and number of times the articles have been cited. Atkinson earned his second place ranking in the list based on 110 published articles, while Schatz earned his seventh place ranking based on 80 articles.

Schatz began his research in Type 1 diabetes during the 1980s and currently serves as principal investigator for TrialNet, an international network of scientists focused on preventing and reversing Type 1 diabetes. Both researchers are also involved in the American Diabetes Association. Atkinson is the current ADA eminent scholar for diabetes research and Schatz will serve as president of the ADA beginning in 2016.