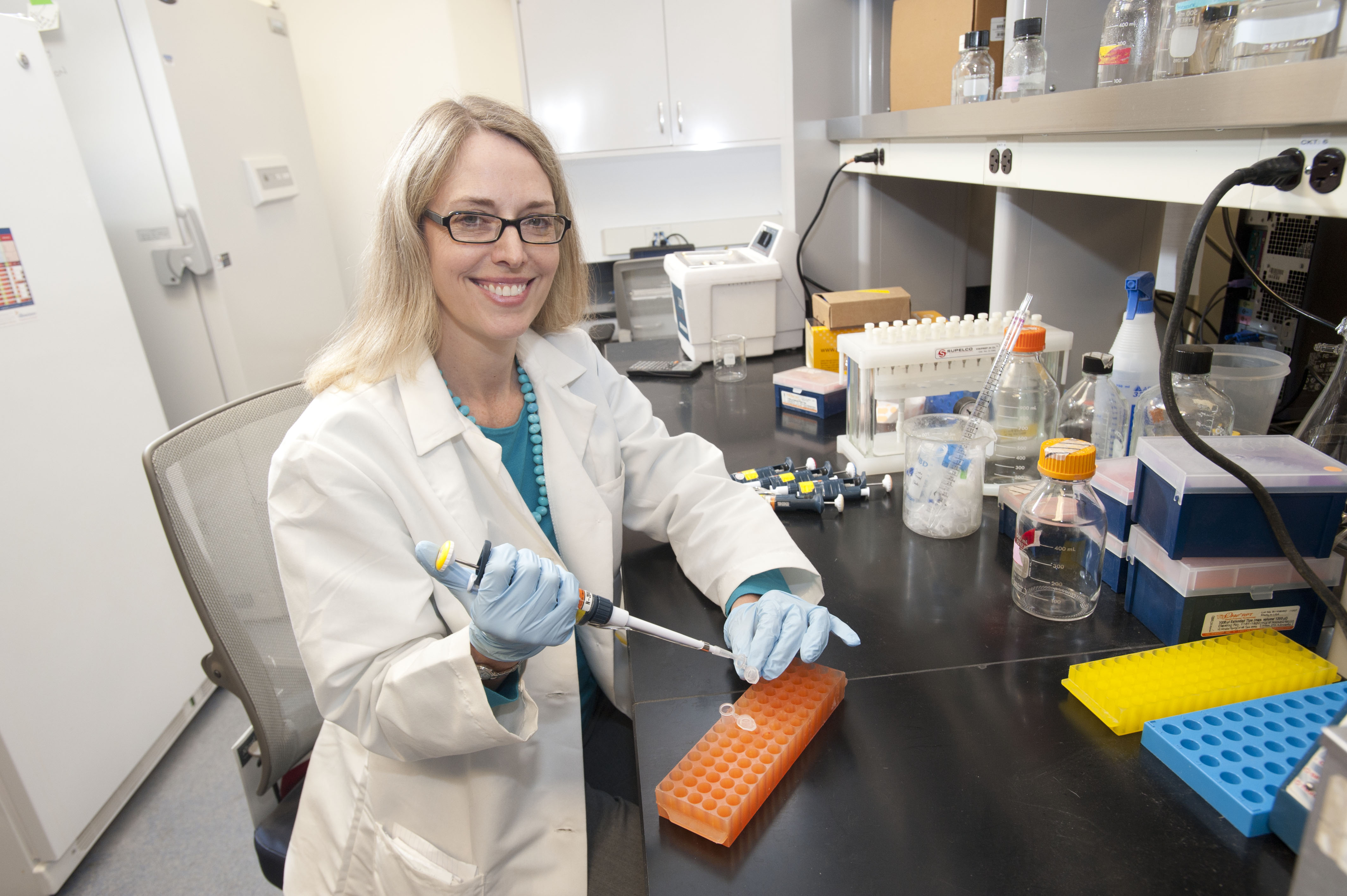 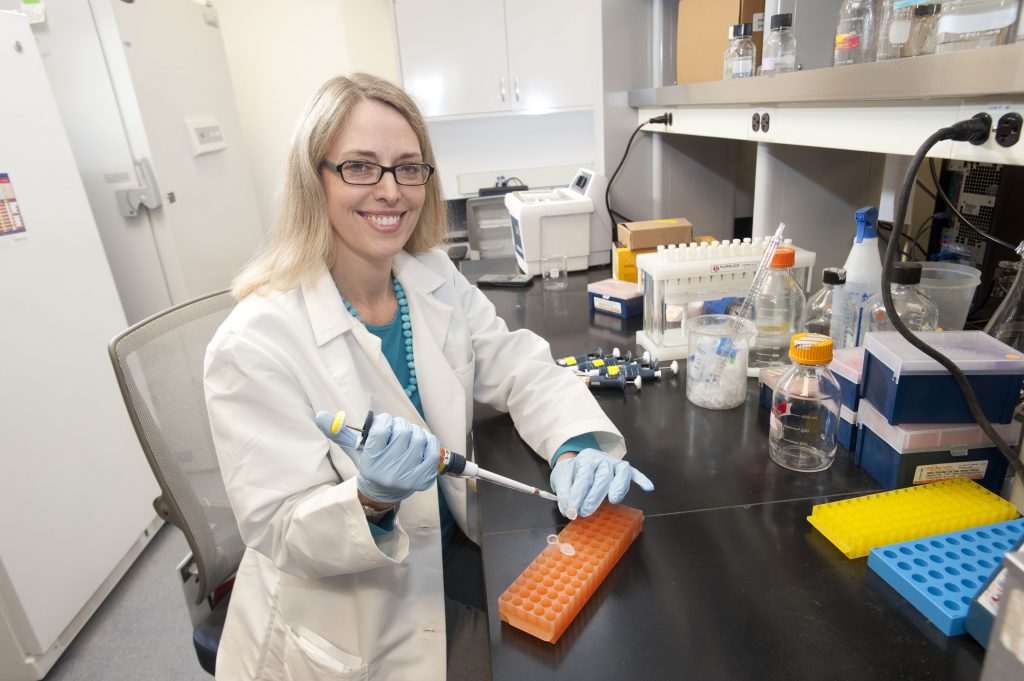 Larisa Cavallari, Pharm.D., is director of the Center for Pharmacogenomics at the University of Florida College of Pharmacy and associate director of the UF Health Personalized Medicine Program. (Source: UF Health News)

A quick, precise genetic test can significantly reduce the risk of cardiovascular events by helping to identify more effective medication for some heart patients, a group led by University of Florida Health researchers has found.

The test identifies a genetic deficiency that affects the body’s ability to activate clopidogrel, a common anti-clotting drug given after a coronary artery stent is inserted. During a recent study from the National Institutes of Health’s Implementing Genomics in Practice (IGNITE) Network, researchers at UF Health and other sites throughout the country analyzed medical outcomes in 1,815 patients who had genetic testing at the time of their cardiac procedure. The genetic testing allows physicians to pinpoint the best anti-clotting medication for each patient.

The study reported significant results: About 60 percent of patients with the genetic deficiency were given a different, more effective medication. Using the genetic data to guide changes in therapy reduced the percentage of deaths, heart attacks or strokes by nearly half compared with those who continued taking clopidogrel, the researchers found. Among those who had the genetic deficiency and continued taking clopidogrel, 8 percent of patients experienced one of those complications. Their findings are being presented today (Nov. 15) at the American Heart Association’s Scientific Sessions in New Orleans.

The study examined the effect of genotype-guided treatment on cardiovascular outcomes after a heart procedure known as percutaneous coronary intervention, or PCI, in which a metallic stent is inserted into a heart artery to treat a blockage. More broadly, one UF Health researcher said it shows the power and the promise of personalized medicine, which tailors medical decisions based on a patient’s genetic information and other unique characteristics.

“We saw significantly fewer adverse events among patients who were switched to an alternative drug,” said Larisa Cavallari, Pharm.D., director of the Center for Pharmacogenomics at the UF College of Pharmacy and associate director of the UF Health Personalized Medicine Program, which was created in 2011 within the UF Clinical and Translational Science Institute. Cavallari is also a member of the UF Genetics Institute.

About 30 percent of all patients have a genetic deficiency that impairs their ability to activate the drug, which can lead to decreased clopidogrel effectiveness and increased risk for adverse cardiovascular events such as strokes, heart attacks and death. Having timely access to a patient’s genetic information can be particularly helpful as physicians work to prescribe the most appropriate medicine.

“This is an important breakthrough in personalized medicine because it shows how a genetic marker can be used to modify treatments and improve patient outcomes,” said Dominick J. Angiolillo, M.D., Ph.D., a cardiologist, professor of medicine and director of cardiovascular research at UF Health Jacksonville.

In addition to pinpointing the best drug for PCI patients, the genetic testing is efficient. On average during the study, a patient’s genetic information was available in about one day and an alternative medication was provided within a similar time.

“There was prompt genotyping and the patients were quickly given the drug we thought would work best for them,” Cavallari said.

Yet decoding a patient’s genetic tendencies isn’t just about rapid treatment: Many patients take an anti-clotting drug for a year or longer.  Patients who had the genetic deficiency and received an alternative medication were less likely to have a major adverse cardiovascular event compared with those who received clopidogrel during the follow-up period of up to a year, researchers found.

The findings are the first from a large group of U.S. patients to show that the risk of cardiovascular problems is reduced when PCI patients with a genetic deficiency get an alternative medication, said Deepak Voora, M.D., a cardiologist and member of the Center for Applied Genomics & Precision Medicine at Duke University and a co-author of the current study.

“This should give patients who carry the genetic variant and their providers confidence to use more effective, alternative medications,” Voora said.

The genetic test that identifies a patient’s response to clopidogrel is already being used at UF Health hospitals in Gainesville and Jacksonville and other sites that contributed to these results. Patient samples for the UF Health sites are analyzed by UF Health pathology labs, which helps to expedite results. In most cases, test results at UF Health Jacksonville are available within an hour. That helps physicians decide in a timely manner which drug to prescribe, Angiolillo said.

The findings being presented today are encouraging, said R. David Anderson, a UF Health interventional cardiologist and professor in the department of medicine division of cardiovascular medicine who assisted with Cavallari’s study. The results of pending clinical trials may help to determine whether or not the genotyping for clopidogrel response becomes more widely used in cardiac care, Anderson said. However, clinical trial data may not be available for several years. In the meantime, Cavallari said, data such as these from patients genotyped as part of clinical care support broader implementation.

This article was originally published by UF Health News, Doug Bennett
It has been modified to include Dr. Cavallari’s UFGI affiliation