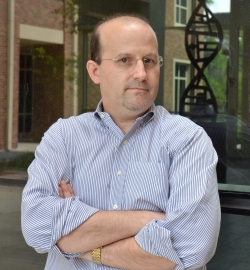 Brad E. Hoffman, Ph.D., is a UFGI faculty member and assistant professor in the Department of Pediatrics

Multiple sclerosis can be inhibited or reversed in mouse models using a novel gene therapy technique to suppress the immune response that induces the disease, University of Florida Health researchers have found.

By combining the transfer of a brain-protein gene with a drug used in organ transplant recipients, the researchers essentially cured mice of multiple sclerosis, resulting in near-complete remission of disease. Their findings, which the researchers said have significant potential for treating multiple sclerosis and other autoimmune disorders, are published today (Sept. 21) in the journal Molecular Therapy.

Multiple sclerosis affects about 2.3 million people worldwide and is the most common neurological disease in young adults. This incurable disorder starts when the immune system attacks the myelin sheath surrounding nerve fibers, making them misfire and leading to problems with muscle weakness, vision, speech and muscle coordination.

The researchers used a harmless virus, known as an adeno-associated virus or AAV, to deliver a gene coding one of the common immune targets, a myelin sheath protein called myelin oligodendrocyte glycoprotein or MOG, into the livers of the mouse models. The protein leads to the production of so-called regulatory T cells, which suppress the rogue immune system cells responsible for attacking the protective layer of nerve cells that defines multiple sclerosis. The effectiveness of this approach is based on targeting the gene therapy to the liver, which promotes immune tolerance.

“Using a clinically tested gene therapy platform, we are able to induce very specific regulatory T cells that target the self-reactive cells responsible for causing multiple sclerosis,” said Brad E. Hoffman, Ph.D., an associate professor in the departments of pediatrics and neuroscienceat the University of Florida College of Medicine.

The gene therapy-induced protein, MOG, was found to be effective in preventing and reversing multiple sclerosis on its own and the results have been validated through multiple independent experiments. Overall, the therapy was tested in groups of five to 10 mice and the results were reproduced multiple times.

Hoffman said he was also encouraged by the treatment’s longevity. After seven months, the mouse models that were treated with gene therapy showed no signs of disease, compared with a control group that had neurological problems after 14 days.

When the gene therapy was combined with immunotherapy using rapamycin — a drug used to coat heart stents and prevent organ transplant rejection — its effectiveness was further improved, the researchers found. The drug was chosen because it allows helpful regulatory T-cells to proliferate while blocking undesirable effector T-cells, Hoffman said.

Among the two groups that were given rapamycin and the gene therapy, 71 percent and 80 percent went into near-complete remission after having hind-limb paralysis or near quadriplegia, respectively. That, Hoffman said, shows how powerful and effective the combination can be at stopping rapidly progressing paralysis.

While researchers have established that gene therapy stimulates regulatory T cells in the liver, Hoffman said little else is known about the detailed mechanics of how that process works.

Before the therapy can be tested in humans during a clinical trial, further research involving other preclinical models will be needed, Hoffman said.

Nonetheless, Hoffman said he is extremely optimistic that his gene immunotherapy could someday be an effective treatment in humans suffering from multiple sclerosis and other autoimmune diseases.

“If our gene immunotherapy can provide long-term disease remission, patients will have long-term improvement with a higher quality of life and that is a very promising outcome,” he said.

The research was funded by grants from the National Multiple Sclerosis Society, the National Institutes of Health and the Children’s Miracle Network.