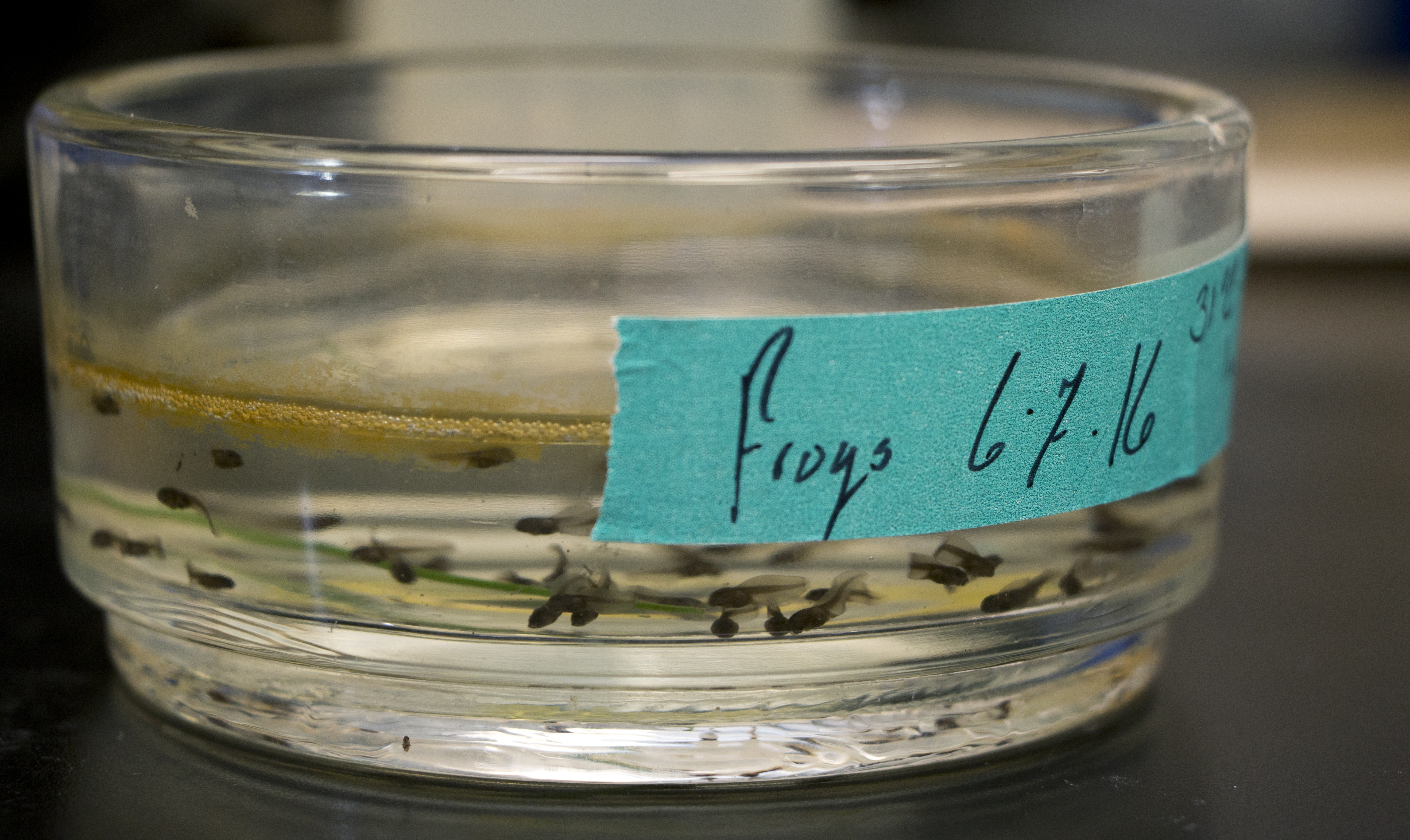 Life began in the sea.

For ages, creatures that were mere specks of life spent their existence feeding and reproducing in the same mud flats and heat vents their ancestors had.

Eventually, a few species evolved enough to explore beyond these environs. Their descendants would go on to do the same, and with the help of eons, give rise to the world we know today.

While researchers feel comfortable they’re on the right track regarding the larger picture of the origin of life; they’re still fuzzy on the details.

Bringing them into sharper focus is one of the major ambitions of the University Florida of Genetics Institute researchers who work at Whitney Laboratory for Marine Bioscience.

“The idea is life evolved from the sea, and here we are at the edge of the sea, and we’re trying to leverage our place,” said Mark Martindale, PhD, Whitney Lab director and professor in the department of biology.

While other researchers are determined to unravel the land-locked mysteries of life, Martindale prefers to investigate where it all started.

His work looks at both development– how a single cell grows into a complex organism– and evolution– how simple microorganisms gave rise to the complex species that now populate the planet.

To do this, he studies a “clade” of animals (meaning they all evolved from a common ancestor) that do not produce a carbonized (hard) skeleton– members include sea anemones and jelly fish. 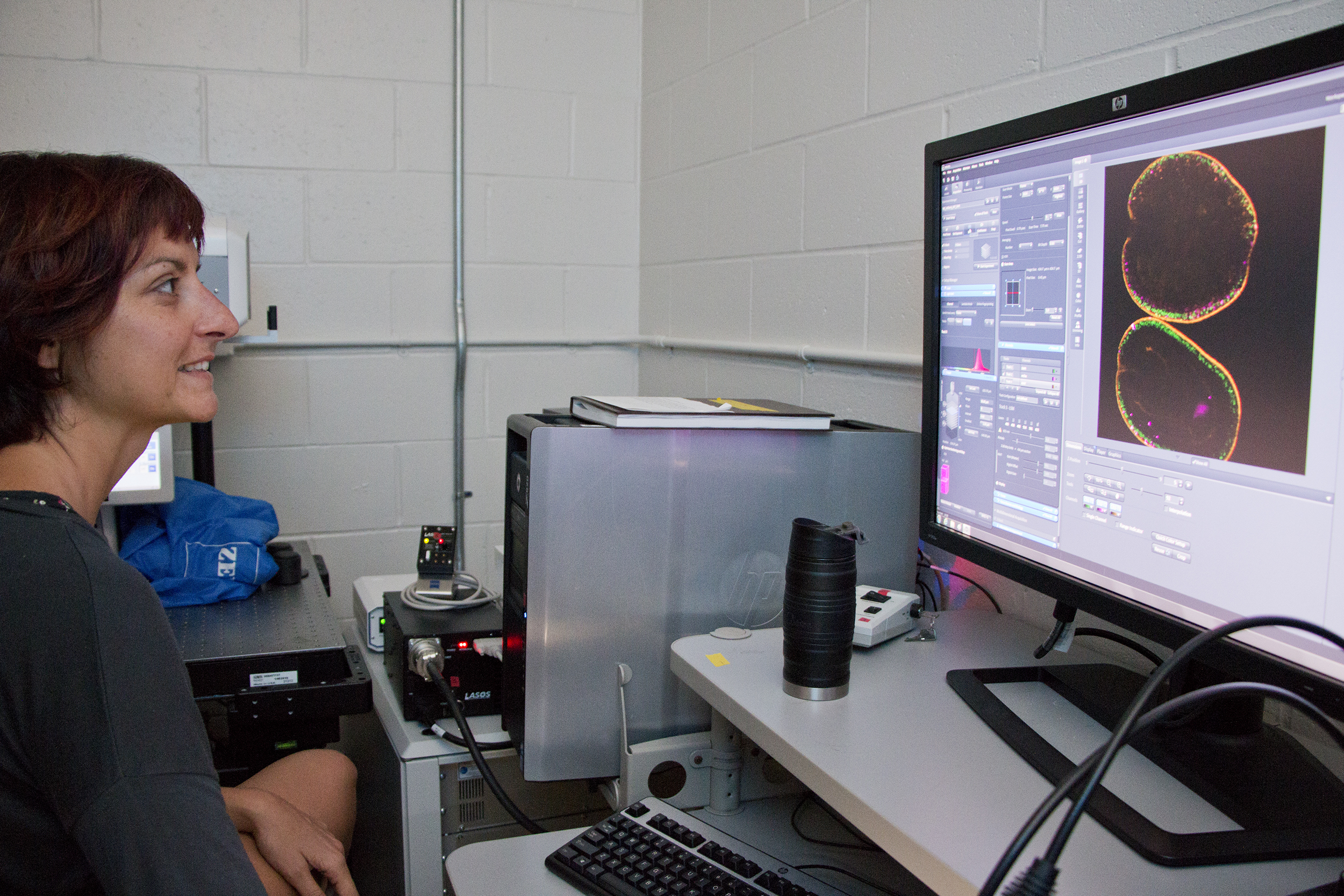 Marta Chiodin, a postdoc in the Ryan Lab, uses a confocal microscope to analyze a tumor-supressing gene.

His team is trying to understand the gene regulatory network that gives rise to two different tissues: the mesoderm (muscular tissue) and endoderm (gut tissue).

In sea anemones, these two tissues are in the same cell layer.

However, in all organisms that evolved afterward, they are separate. Even more intriguing– sea anemones have the genetic potential for distinction between these cell layers, it just doesn’t happen.

Martindale is trying to figure out why.

Another project involves the physiologically rebellious descendant of anemones and jellyfish– coral.

Coral bleaching spurred by climate change has devastated reefs around the globe. As coral are too delicate, and too regulated, for researchers to study long-term, they have been compelled to pursue alternatives for tackling the problem.

They found the answer in upside-down jellyfish.

Coral and upside-down jellyfish (so-called because they spend most of their lives upside-down) acquire algae symbionts. The process of removing the symbionts from the jellyfish closely resembles the process that leads to coral bleaching. By making the symbiont leave the jellyfish, Martindale hopes to learn why they require a symbiont, and thereby gain insight into the causes of coral bleaching.

Whitney Lab was originally established as an outpost for the UF College of Medicine. Medical researchers around the nation studied marine animals to learn more about embryo development and the electrical basis of nerve function. However, they were only able to do so at a few locations and only for a few months out of the year.

Sam Gurin, PhD, a professor of biochemistry at UF, and Sonny Whitney, one of the founders of Marineland, collaborated to construct Whitney Lab in southern St. Augustine, Florida, which would allow scientists access to marine animals, and the research facilities needed to study them, year-round.

Since then, the lab has expanded to included more pure science pursuits.

“We do CRISPR on three different phyla of animals,” Martindale said. “We’re sort of ahead of the game in that.”

The Lab also offers a summer program for students called Research Experience for Undergraduates funded by the National Science Foundation. Students from colleges around the nation apply to spend 11 weeks doing research in one of a handful of labs.

The program prioritizes recruiting students from colleges that do not offer advanced degrees in science, or have limited science research programs.

At the end of the summer, they each give a talk, and present a poster during the REU Symposium.

The Seaver lab raises frogs to study their development.

“I enjoy engaging undergraduates in research, and encouraging them to explore their natural curiosity, build critical thinking skills and discover skills that they bring to solving a scientific problem,” Seaver said.

Seaver studies the development, embryology and regeneration capabilities of marine annelids– a type of segmented worm similar to an earthworm.

“We’re interested in several general areas,” Seaver said. “One has to do with animal diversity, and how changes in the developmental program give rise to new body forms.”

Her goal is to uncover the cellular and mechanisms that orchestrate how body parts are formed during development. For example, what enables annelids to continue to form segments, growing longer and longer during their life spans?

Like most worms, marine annelids also offer hints at the mechanics of regeneration. The segments all grow from a specialized region at the tail end of the worm called a “posterior growth zone.”

However, if a worm is cut in half, the front half is able to regenerate itself.

Seaver wants to uncover the mechanisms the enable the worm to regenerate sections of its body beyond the posterior growth zone.

“The animal doesn’t know where it will get cut.” Seaver said. “Cells may need to migrate from a different location. What is the cellular origin of the new tissue?”

They even regenerate complex tissues such as muscles, nerves and epidermis– an ability almost all mammals lack. 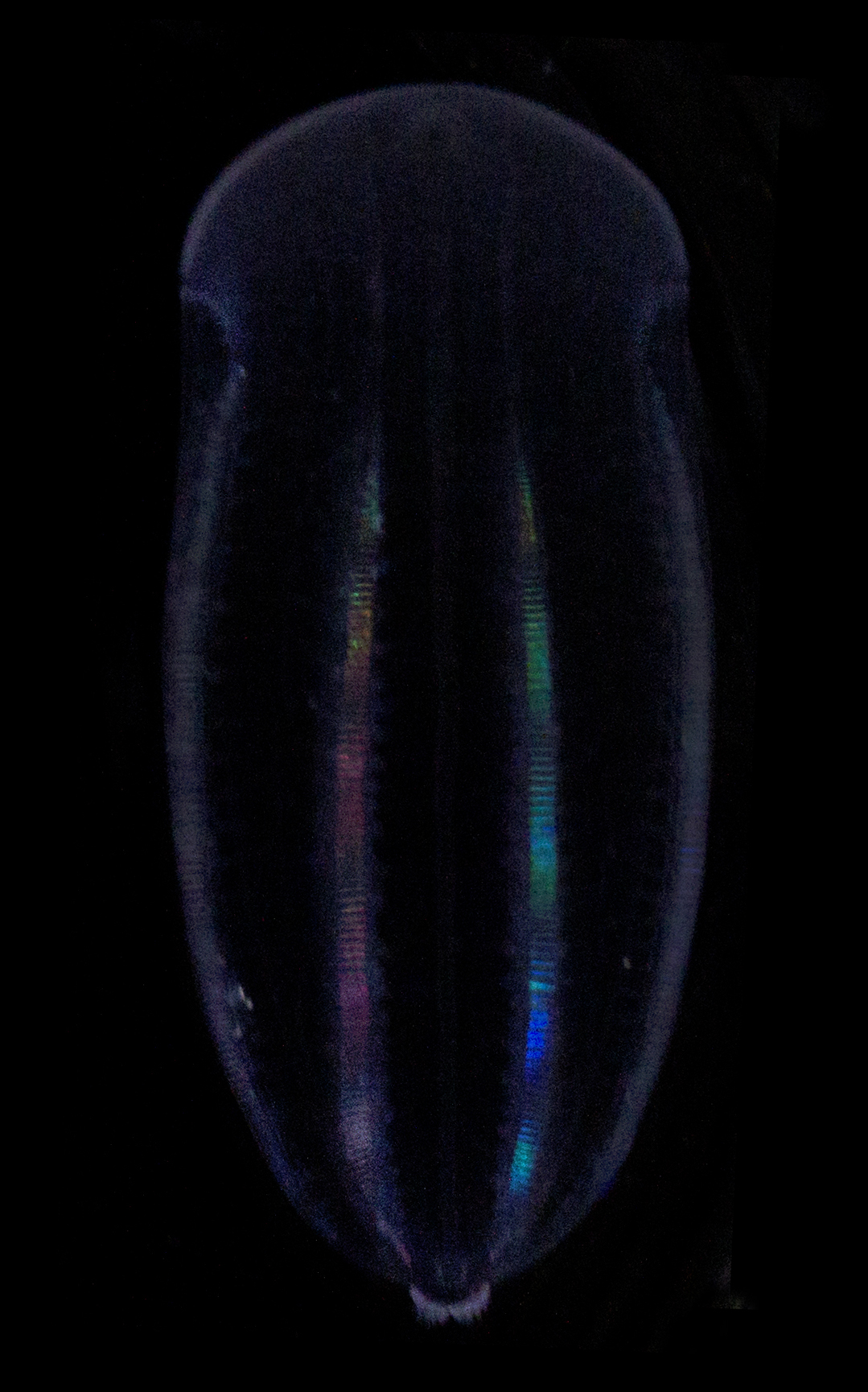 Ctenophores propel themselves with cillia. When cillia move, they refract light into rainbow-colored pulses. (Caption info from Nature.com)

While many scientists often have to travel long distances to reach their research subjects– trekking miles into the desert, or waiting months for crops to mature– the staff at Whitney Lab need only step out their back door.

The facility was built between the coast of the Atlantic Ocean and the banks of the Matanzas River. It has an 800-foot underground pipe running from the sea to the lab, providing a fresh supply of seawater in which to house the research animals.

One of the varieties of animals UFGI faculty member Joseph Ryan’s lab studies are ctenophores. Also known as “comb jellies,” ctenophores are clear, globular organisms that propel themselves using rows of tiny cilia called “combs.” They range in sizes similar to a handful of spare change.

Scientists believe they were one of the earliest groups to branch off of the tree of life. Ryan’s lab staff collect them by dipping small buckets attached to poles into the Matanzas River behind the lab.

“These guys are not very well studied at all,” said Daniel Sasson, PhD, a post-doctoral associate in Ryan’s lab. Ryan, PhD, an assistant professor in the department of biology, was out of town the day interviews were conducted. “By studying ctenophores we can get some ideas about what the ancestor to all animals was like.”

More generally, Ryan’s lab studies animals that demonstrate radial symmetry– meaning, regardless of where you slice them from the top down, both halves will match. They use a combination of computational, molecular and behavioral techniques to study organisms such as coral and anemones, in addition to ctenophores.

They use bioinformatics techniques to perform genetic comparisons of the organisms they study. Some species of ctenophores live in shallow water, while others live deep in the open sea. Ryan’s lab compares the genetic structures of these differing species to determine what enables certain species to withstand the heavy pressure of deep water.

Ctenophores are simultaneous hermaphrodites– meaning they are able to reproduce by fertilizing their own eggs.

“[We’re] trying to use ctenophores to understand why you have separate sexes,” Sasson said. “One of the hypotheses about why you get the separation is the potential cost of inbreeding.”

To study this, the researchers fish up a bucket of ctenophores from the bay behind the lab, disperse them across several glass dishes and let them stand overnight to see if they spawn.

Some of the jellies are placed in dishes by themselves, while others are left with a partner. Sasson said they have found the cross-fertilized eggs are more viable than the self-fertilized. 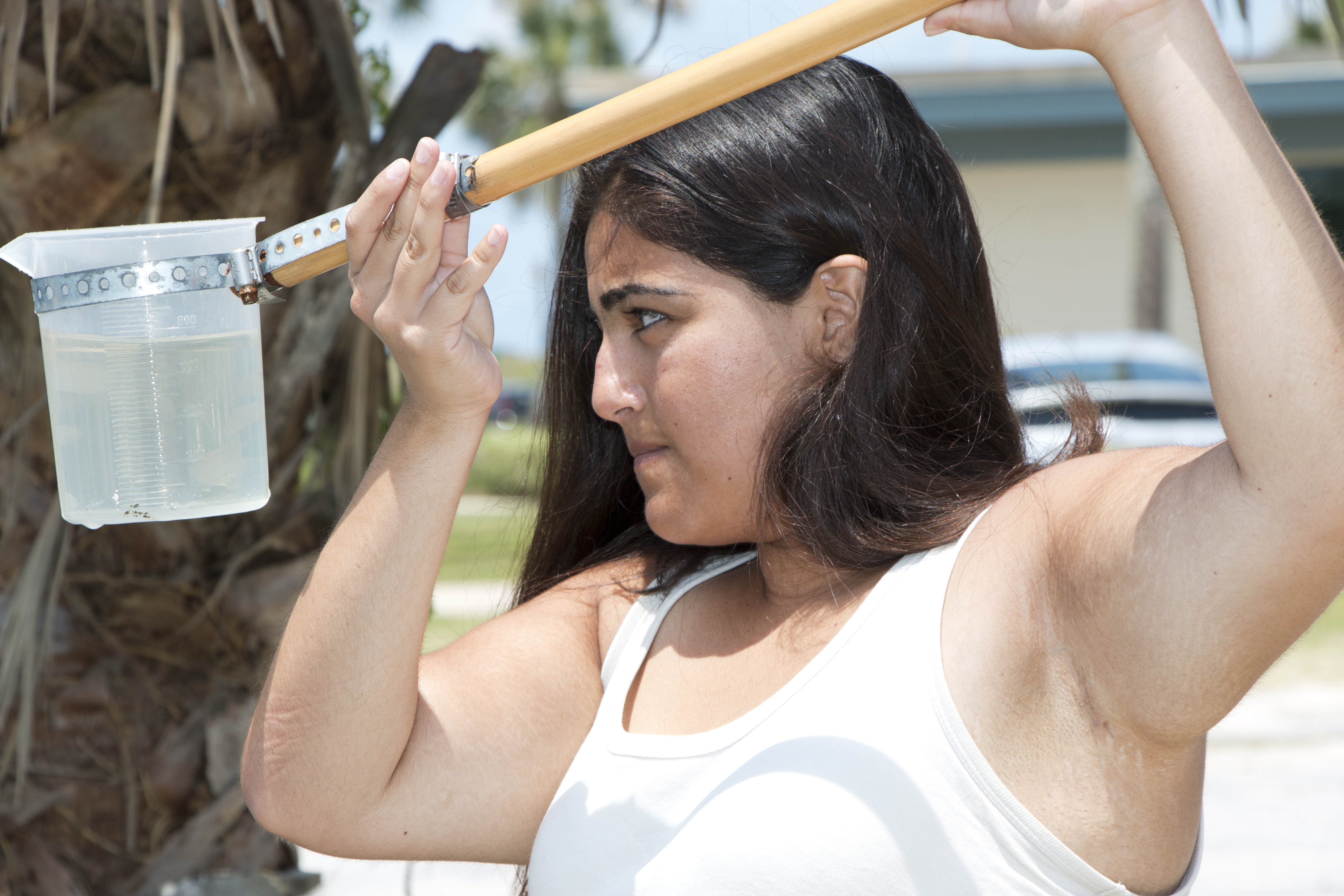 Anya Jacquez, a visiting undergraduate researcher in the Ryan lab, examines a container of ctenophores caught in the Matanzas River.

Although Whitney Lab was established to further medical developments, it now focuses almost entirely on “pure science,” or research for the sake of learning more about the natural world.

“The lab has come a long way in the last couple of years,” Martindale said. “We need to grow a bit more, however, so that we have ‘critical mass’ in the areas we want to excel in.”

One endeavor has been to develop the Lab’s “training environment.” Martindale said they’ve made more of an effort to provide opportunities for graduate students and postdocs to develop their professional skills though teaching, writing and oral presentations.

Ultimately, Martindale hopes to strengthen intellectual relationships with main campus, expand and modernize the current facility and double the number of resident faculty.

“This will allow us to share our ideas and resources with a wider range of people around the world,” Martindale.