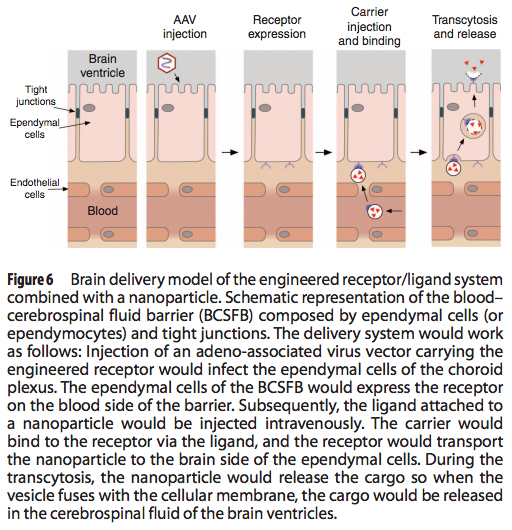 One of the most frustrating obstacles to treating brain tumors is that there are drugs that can fight the tumors– doctors just can’t use them. When doctors attempt to introduce these drugs into the body through the bloodstream, the blood-brain barrier prevents the molecules from entering the brain. Any attempt to deliver a therapeutic dose to the brain would require doctors to introduce such a high dose of the drug into the body, that it would be toxic for the rest of the organs.

Héctor Méndez-Gómez, a post-doc in Genetics Institute Faculty Member Nicholas Muzyczka’s lab may have taken the first step to an alternate solution.

In a paper published in October by Molecular Therapy – Methods & Clinical Development, a Nature journal, Méndez-Gómez revealed the results of an attempt to deliver proteins directly to the blood-brain barrier and nowhere else. The title of the paper is, “Transcytosis in the blood–cerebrospinal fluid barrier of the mouse brain with an engineered receptor/ligand system.”

The paper is available online.

“We thought that creating a unique receptor/ligand pair would be an excellent tool for brain delivery, because the receptor wouldn’t be expressed anywhere else in the body, so the ligand would go exclusively where the receptor is located,” Méndez-Gómez said

Why was this necessary?

However, by expressing the receptor in the brain barriers, the ligand (or medication) goes only to the brain.

Méndez-Gómez placed the receptor in the blood-cerebrospinal fluid barrier (one of the barriers of the brain) and introduced the ligand carrying a fluorescent protein into the bloodstream of his test subject. When he analyzed the brain, he found the fluorescence lighting up at the edge of the brain barrier.

“I was very excited,” he said.

However, the experiment is but a stepping-stone to being able to use it to treat any brain disease in humans.

Another problem stems from the biological components used to conduct the experiment.

“Part of the receptor/ligand proteins come from bacteria, so they’ve never been seen by the human immune system” Muzyczka said.

Meaning, if this treatment was attempted in humans, their immune system would likely reject it. Modifications will need to be made before it is compatible with human physiology.

Regardless, it’s an exciting return on three years of work. If future experiments prove successful, this method of treatment may help people suffering from diseases such as brain cancer, Parkinson’s and Alzheimer’s.