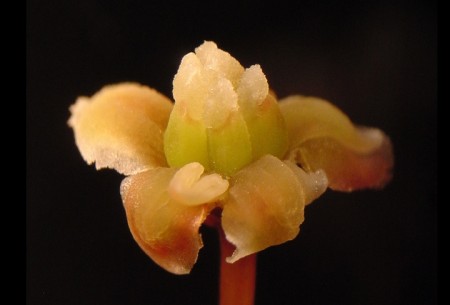 University of Florida researchers and their colleagues have sequenced the genome of the flowering plant Amborella for the first time, potentially revealing why flowers may have proliferated millions of years ago and offering clues for improving all major food crop species.

Appearing in the journal Science on Friday, Dec. 20, two separate studies analyze the Amborella genome and provide the first insight into how flowering plants differ genetically from all other plants, said study co-author Doug Soltis, a distinguished professor with the Florida Museum of Natural History on the UF campus. Amborella trichopoda, a plant found only on the main island of New Caledonia in the South Pacific, is unique as the sole survivor of an ancient evolutionary lineage that traces back to the last common ancestor of all flowering plants.

The first study, led by The Pennsylvania State University and co-authored by UF scientists, provides conclusive evidence that the ancestor of all flowering plants — including Amborella – evolved following a “genome doubling event” that occurred about 200 million years ago, Soltis said.

“Genome doubling may offer an explanation to Darwin’s ‘abominable mystery’ — the apparently abrupt proliferation of new species of flowering plants in fossil records dating to the Cretaceous period,” Soltis said. “When genome doubling occurred, some duplicated genes were lost over time but others took on new functions, including contributions to the development of floral organs.”

The second study, led by UF, describes a new strategy used to sequence and assemble the Amborella genome. Researchers say the new methods are applicable to most plants and animals with large, complex genomes, which contain substantial amounts of DNA, like Amborella, previously considered too problematic or expensive to tackle.

“Because of Amborella’s pivotal phylogenetic position, it is an evolutionary reference genome that allows us to better understand genome changes in those flowering plants that evolved later, including genome evolution and improvement of our many crop plants,” said Soltis, who also holds appointments in UF’s biology department and the UF Genetics Institute.

Comparative analyses of the Amborella genome are already providing scientists with a new perspective on the genetic origins of important traits in all flowering plants — including all major food crop species. As the oldest surviving branch of angiosperms, the Amborella genome allowed researchers to estimate the linear order of genes in an ancestral eudicot genome and to infer lineage-specific changes that occurred over 120 million years of evolution in the core eudicot.

“Amborella had never been studied in any detail, so we started from scratch trying to put together this jigsaw puzzle of hereditary information by mixing methods that have never been used in combination before,” Soltis said. “Now we can assemble, sequence and evaluate complex genomes and answer fundamental biological questions.”

Without any genetic map or advanced knowledge of its genome architecture, UF scientists assembled the Amborella genome using next-generation sequencing technologies and high-throughput computing, which allow scientists to sequence and assemble genomes at a low cost and faster speed, said co-author Brad Barbazuk, a UF associate professor in biology and member of the UF Genetics Institute.

Researchers used an evaluation technique called fluorescence in situ hybridization to validate the genome, in which DNA segments are located on chromosomes with florescent dyes, and whole-genome mapping, which produces a high-definition image of DNA molecules and improves the genome assembly process, Barbazuk said.

“Our method has produced an exemplary genome assembly, and this method is not restricted to studying Amborella,” Barbazuk said. “However, it’s unlikely to fit every case, and that will give us the opportunity to look for new methods and make the process better.”

Study co-author Pam Soltis, a distinguished professor and curator of molecular systematics and evolutionary genetics at the Florida Museum and a member of the UF Genetics Institute, said previously, extensive time and resources were required to sequence and assemble large and complex plant genomes.

“Since these resources are unavailable for most species, the only organisms that could have their genomes sequenced until now were those with a long history of scientific study,” she said. “All kinds of evolutionary and ecologically important organisms were excluded from genome sequencing studies because there was no way to get the information that you needed to put it together.”

In addition to its utility in studies of flowering plant evolution, the Amborella genome sequence offers insights into the history and conservation of Amborella populations. There are fewer than 20 known populations in mountainous regions of New Caledonia, Pam Soltis said.