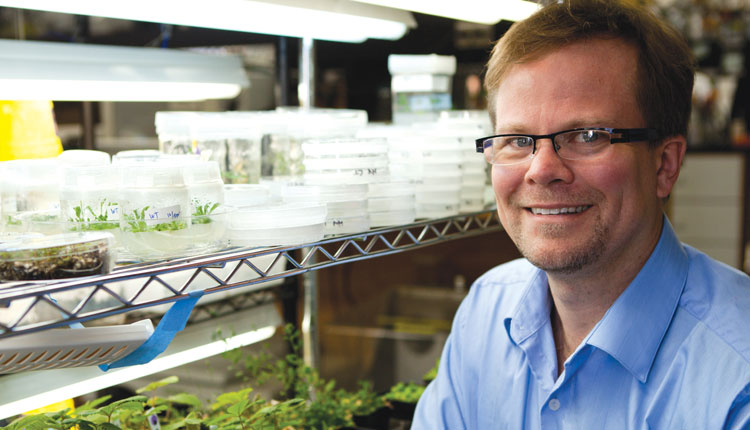 After over half-a-year of fending off anti-GMO critics, and even retreating from science communication altogether, Kevin Folta is being recognized by his peers for his science advocacy.

Folta is the 2016 recipient of the Borlaug CAST Communication Award.

He serves as chairman for the horticultural sciences department at the University Florida, UF/IFAS faculty member and a member of the UF Genetics Institute.

The honor is bestowed by the Council for Agricultural Science and Technology.

“A teacher, mentor, researcher, and organizer, Folta focuses on clear, credible information,” according to the CAST press release. “He knows how to communicate science to non-scientific audiences—and how to train scientists, farmers, physicians, and students to perform public outreach in scientific or controversial topics.”

They cited his prolific blog, Illumination, and his weekly podcast, Talking Biotech.

One of the research focuses of his lab is how light quality affects fruit and vegetable development. His team also uses genomics to identify genes associated with flavor and disease resistance.

Borlaug, a pioneer of plant breeding credited with saving millions of lives, is a longtime hero of Folta’s.

“It is a pinnacle,” Folta said. “To even be considered for recognition in his name is beyond an honor. He exemplified what we all should be doing as scientists– pushing new ideas in science that can help people, especially the most needy. I’m so grateful for this recognition.”

Folta has made sharing science with the general public a major focus of his career. He finds laypeople often have misconceptions about science, because those who stand to profit from peddling misinformation often work harder to reach the public than the scientific community does.

“As scientists, we complain about not being valued, lousy funding rates, and poor public perception. What reason have we given them to value us?” Folta said. “We don’t share our stories. If we talk to the public in ways they can understand, to show them how our priorities fit theirs, that we have common concerns– they will appreciate what we do.”

He will be presented with the award during a conference Oct. 12, 2016 in Des Moines, Iowa, according to a press release.

“[The award] is real motivation to do more, push harder, make more of a difference,” Folta said. “It is an opportunity to use this new platform to teach others how to talk about science with a concerned public. How do we stop being scientists and start being trusted friends?”