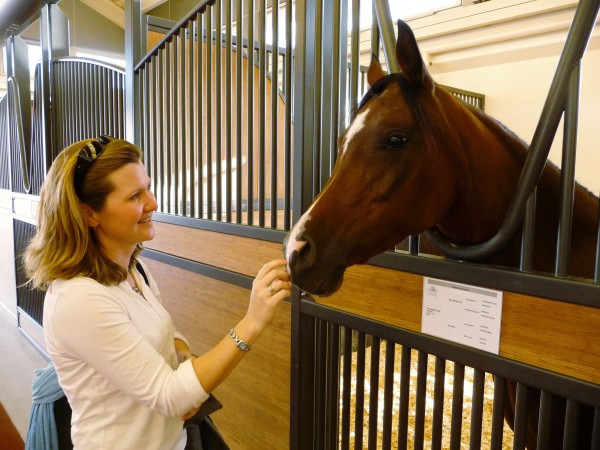 As the global climate shifts in coming years, regions accustomed to abundant rainfall will need to learn how to make do with less. Others will have to adjust themselves to warmer temperatures.

However, some regions are already well-versed in these ways of living, and have been for as long as people have lived there.

Researchers are looking to them for guidance in how to adapt to climate change.

Samantha Brooks, assistant professor in the department of animal sciences, and Genetics Institute faculty member, studies the Arabian horse, dromedary camel, and Arabian oryx to understand how certain mammals survive in such a hot, arid climate.

“They’re all important to the Arabian peninsula,” Brooks said. “They’re all culturally important. They’ve all, in their own way, adapted to survive in an arid environment with not a lot of water.”

In 2013, a research team led by Brooks was awarded a $1 million grant, funded by the Qatar National Research Foundation, to study the genetics of these three species over three years. She collaborates with Doug Antczak, Cornell University, and Ben Shykind, Weill Cornell Medical College in Doha, Qatar.

Brooks’ goal is analyze the genome structure of all three species– sequencing the genomes, and then creating a reference other researchers can use. A lot of work has already been done on this regarding the Arabian horse, but comparatively little has been done to assess the genome sequence of the camel or the oryx.

This information will enable researchers to better understand the genetic components that enable these species to live in such an austere climate, and how other mammals might be bred to better withstand warmer temperatures and more arid environments.

“Their genome is going to be unique,” Brooks said. “It has adapted to meet the needs of the climate they live in, so we’re going to look at what is different about a camel genome, and an oryx genome, compared to related mammalian species.”

The three species have been used in a variety of ways historically in the Arab peninsula.

The horse has been adapted for desert survival and endurance in an arid climate. Horse races upwards of 100 miles are a cultural tradition.

The camel is valued as a pack animal, as well as for its meat and milk.

The oryx was hunted into extinction in the wild by the 1970s. Hunters were after its meat and horns. Breeding in captivity has boosted its numbers back into the thousands, and now its status is classed as “vulnerable.”

Brooks said she wouldn’t be surprised if, in coming years, the rest of the world comes to value these species as Arab cultures have.

“We might start to change how we utilize these animals,” she said.

Some have begun touting camel milk as a “super food” or “healthy alternative.” The oryx has demonstrated its ability to thrive in captivity. Brooks said it could potentially be managed on the range as livestock.

“The animals that have survived there have survived for a reason,” Brooks said. “How they have managed to be successful while others have not; that’s what we want to understand.”