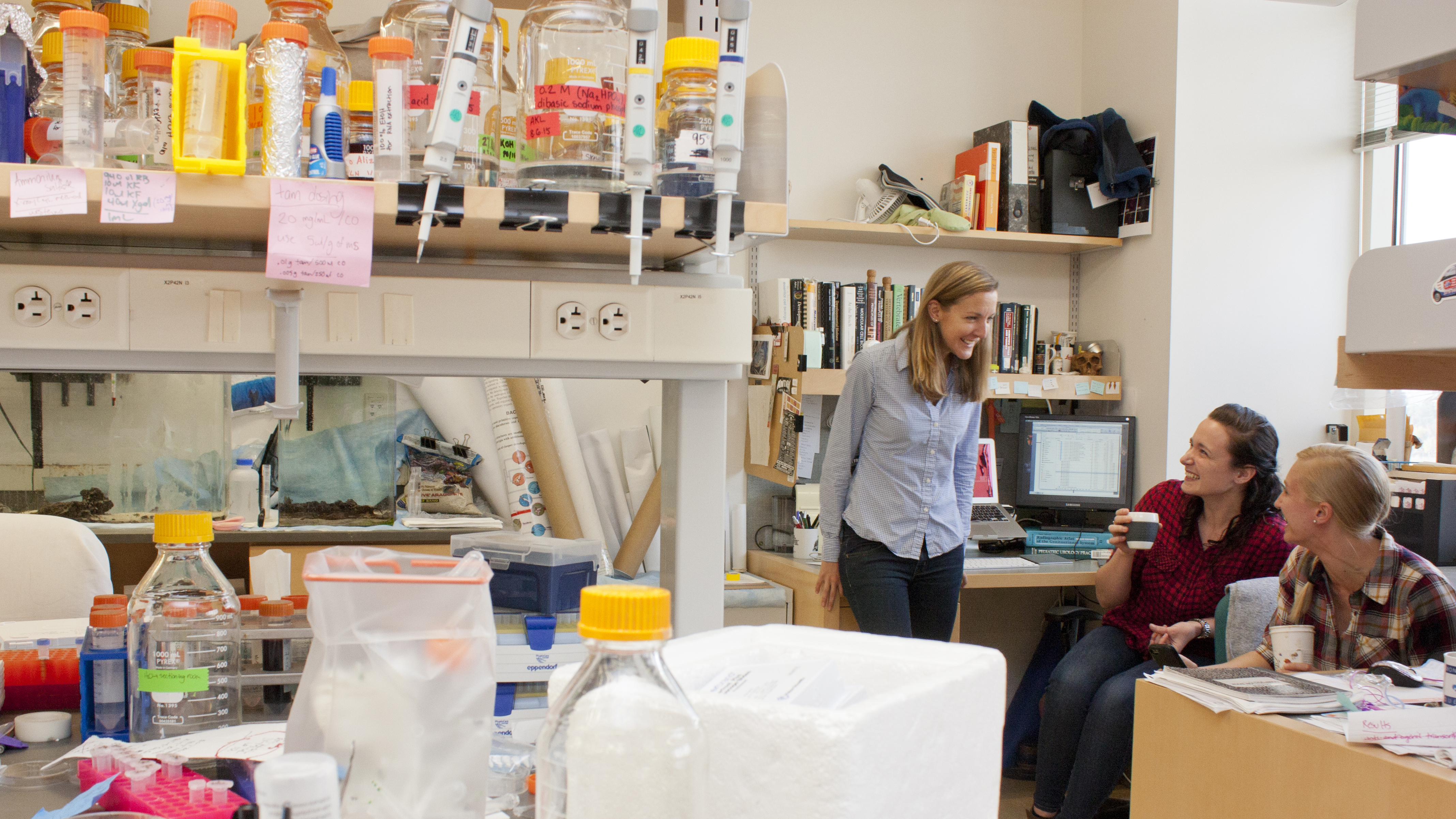 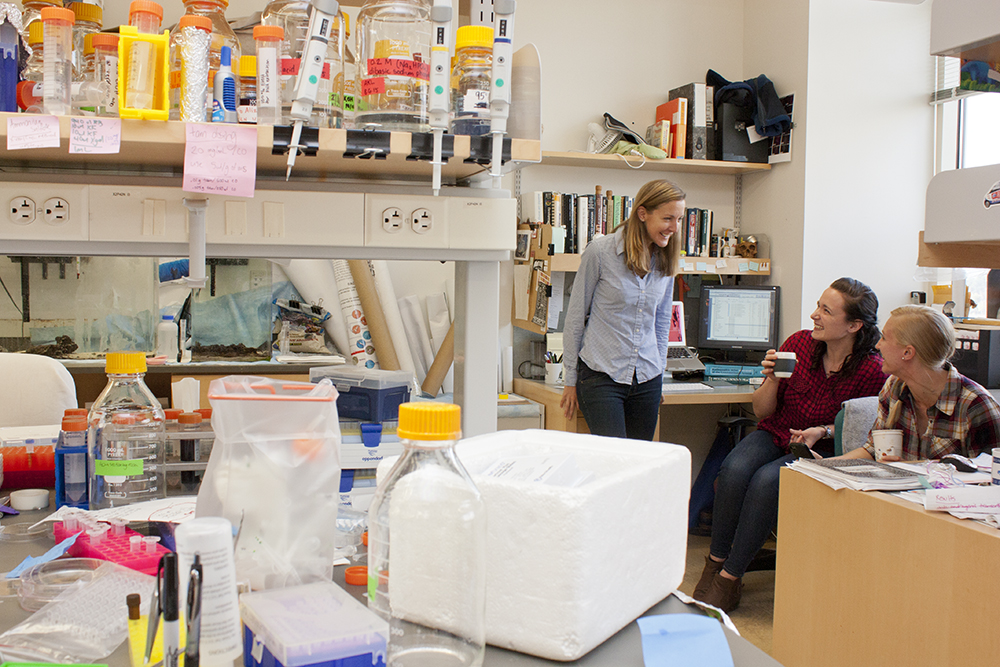 (L-R) Christine Larkins, Marissa Gredler and Kelsey Lewis are members of the research group that works in Marty Cohn’s lab at the University of Florida.

Marty Cohn’s lab at the University of Florida looks about like any other lab.

Goofy cartoons on the walls that may or may not reference the lab’s field of research. Pipettes and plastic containers lining the shelves. A small aquarium housing shark egg cases.

But after a few moments, it becomes apparent there is something is unusual about the Cohn lab– almost all of the researchers are women.

“I don’t know the reason for that,” said Cohn, a Genetics Institute faculty member and professor in the departments of Molecular Genetics & Microbiology and Biology. “I know that my selection criteria are simple — I really want the best people in the lab.”

He says he looks for three characteristics above all others– you have to be nice, you have to be curious and you must possess a tremendous work ethic. 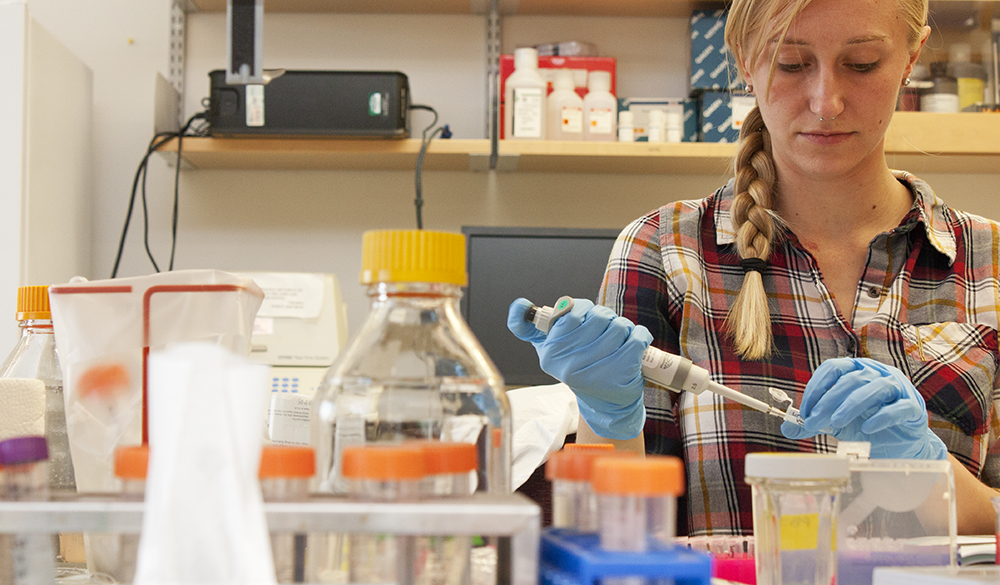 Kelsey Lewis works with a micropipette in the Cohn lab.

The women in the lab aren’t sure how the composition happened either.

“Maybe it’s because we give birth?” suggested Christine Larkins, a research assistant professor in Cohn’s group. “I’ve always thought it was really cool, the whole problem of patterning– how you go from a single cell to a living, breathing human baby.”

Earlier in his career, Cohn focused on limb development. Since then, his lab has expanded to focus on evolution and development of various appendages, including genitalia.

To them, a lab full of women studying phallus development is nothing out of the ordinary.

But, every once in a while, they find themselves out with people who are not research colleagues, trying to explain what they do for a living.

“When we’re out at a bar, and we try to explain our work to people that aren’t in the lab, that’s when we have difficulty,” said Marissa Gredler, who joined the lab in 2008, and received her PhD in 2015.

Some of them try for delicacy. Larkins usually describes her work as studying “sexual differentiation.”

That’s when her colleague Kelsey Lewis jumps in, “’She studies vaginas!’”

Larkins, the soft-spoken elder stateswoman of the group, decided to pursue a research doctorate after an undergraduate adviser suggested it would suit her better than pursuing an MD. She joined Cohn’s lab as a post-doc in 2011 after getting her PhD in cell and developmental biology at Emory University.

“I enjoy the lab environment– the independence, doing research, reading papers and finding new questions to answer,” she said. 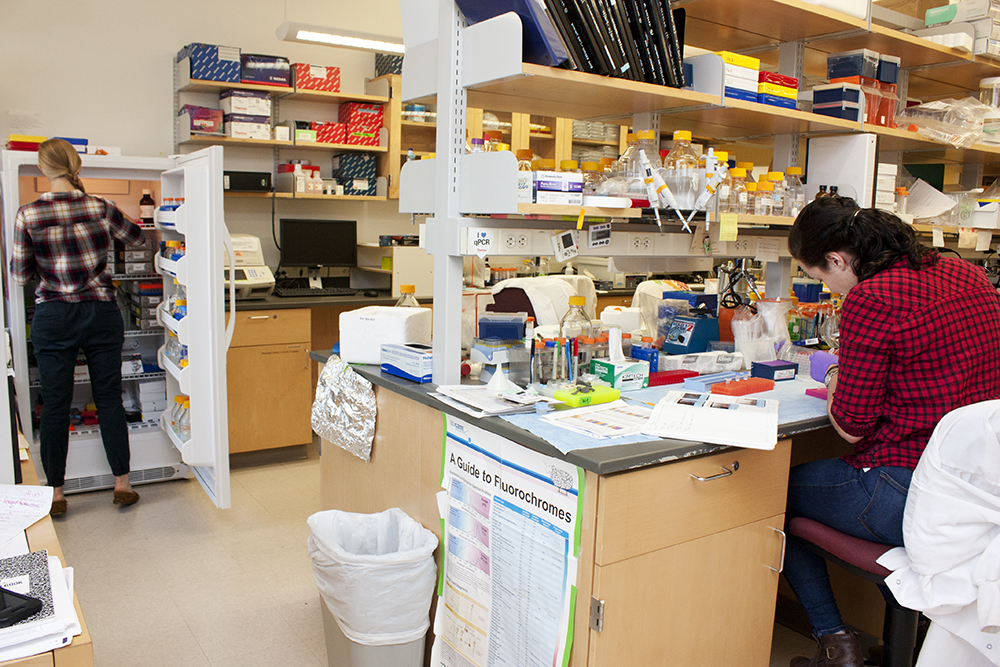 When Larkins was looking for post-doc positions, she was intrigued by Cohn’s focus on evolutionary biology.

Before interviewing with him, she told everyone, “I’m going to go interview with him, but I’m not going to study genitalia.”

Now she studies sexual differentiation of the urethra– how hormones contribute to forming external or internal genitalia, and how birth defects arise as a result of that process being disrupted.

“I think what we’re studying is important,” Larkins said. “After joining Marty’s lab, I realized there are not a lot of people studying genital development and sexual differentiation, and there’s a lot of birth defects in external genitalia.”

Roughly 1 in 250 infants are born with a genital malformation, according to figures from the Center for Disease Control.

It was only half-a-year ago ago that biochemist Tim Hunt made his boorish assertion before a conference for female journalists and scientists that co-ed lab environments are inevitably complicated by romantic entanglements– that women researchers unfailingly respond to professional criticism with tears.

He was immediately encouraged to resign, but his censure was met with resistance by others who remain in the field.

For the ladies of the Cohn lab, their workplace is an oasis of equality. 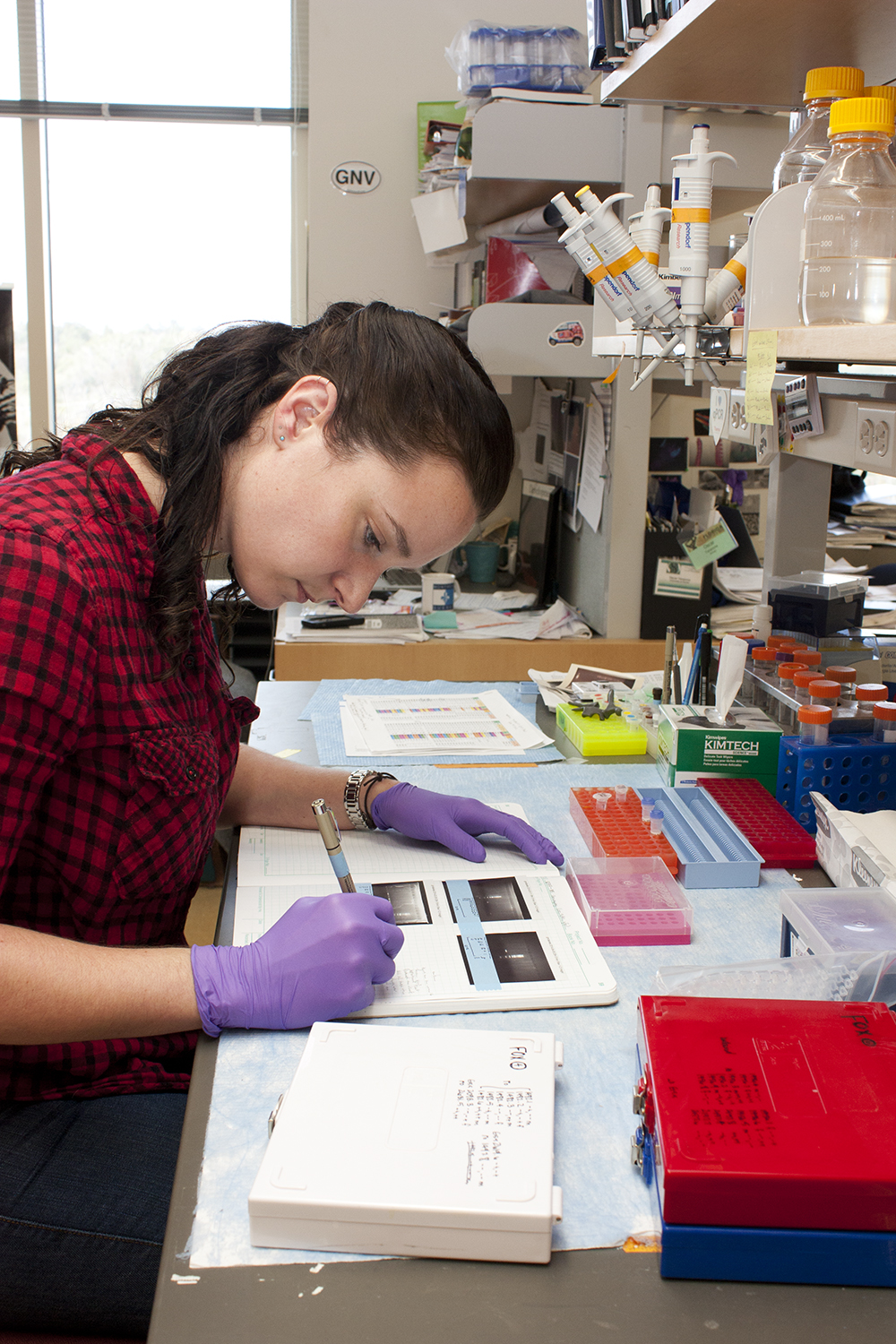 Marissa Gredler records her research in the Cohn lab.

However, they haven’t spent their entire educational and professional lives in the lab.

While it’s not a problem now, some of them overheard biased remarks in previous research positions– for instance, male grad students with children and stay-at-home wives expressing skepticism about whether women should be having children while in grad school.

Others witnessed them at conferences.

“All I could think was, ‘I’m so glad I don’t work for someone who would say that,’” said Lewis, a doctoral student. “I can’t even imagine a universe where Marty would make comments like that.”

Lewis completed her undergraduate degree at all-women Mount Holyoke. While considering applying to the Cohn lab, she was more resistant to its location in the South than the prospect of working under a male PI.

Cohn provides professional development guidance to help his female researchers deliberate how much they want to “lean in,” and how best to go about it.

“It occurred to me that my experience as a man in science has just been different,” Cohn said. “I haven’t been asked the same kinds of questions that women are asked. And the questions they were asking me I couldn’t answer.”

Questions like when to have kids, and how to strike a balance between working and making time for a home life.

These were issues he had never had to consider in the way they would, and he didn’t feel comfortable stepping out blindly in advising them. So he brought in someone who could.

He asked a few female colleagues to visit his lab meetings, discuss their careers and take questions.

In spite of the challenges, Larkins said she hopes to become a university faculty member and have her own lab.

While some might be tempted to assume a predominately-female lab would succumb to homogeneity, Gredler said the intellectual diversity in the lab has enhanced her work.

While referencing the graph-lined pages of her scrupulously tidy notebook, she says the multiple focuses of the lab have broadened her thinking.

“I’m really thankful to have had the opportunity to do both evolutionary and developmental biology,” Gredler said. “I have a whole new way that I approach a problem that I never would have had if I hadn’t done some evolutionary research too.” 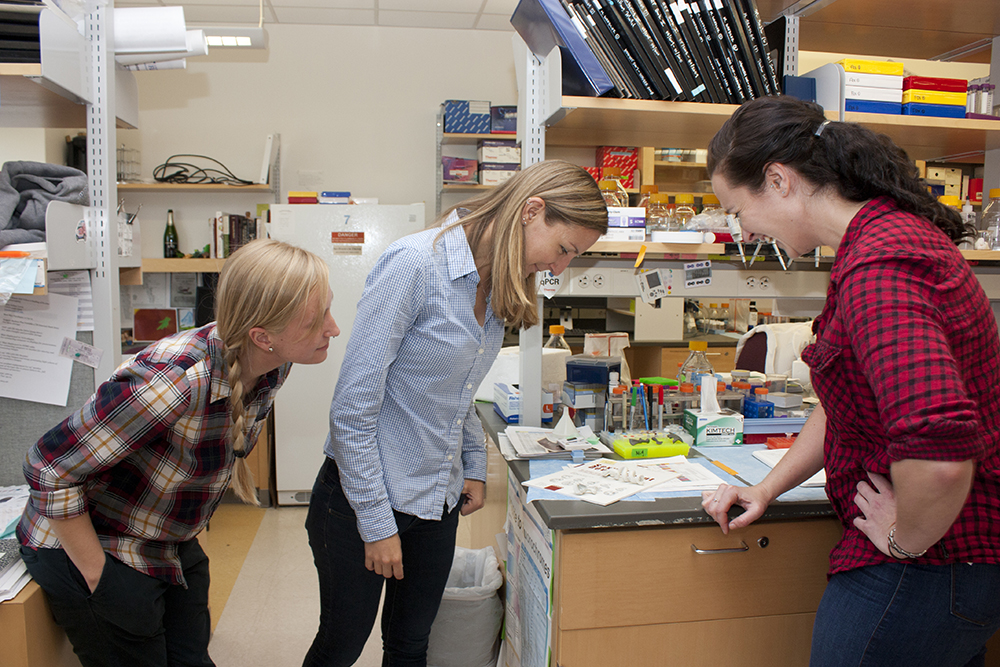 Double-dipping, she has studied both the molecular genetics of urethral tube closure in mammals, as well as mechanisms by which those processes have evolved in non-mammalian species.

Gredler said gender dynamics in the lab are so positive that she hadn’t ever given them a thought until she was approached to discuss them for this publication.

However, public reminders of professional prejudice, such as the Tim Hunt debacle, serve as jarring reminders that not everyone’s workplace is as idyllic as this.

Even hierarchy in terms of seniority is discouraged. If an undergraduate assistant knows how to perform a technique better than a post-doc, the elder researcher is expected to respectfully learn from them.

“Just the mutual respect and the grounds on which we interact with one another, critically in terms of our science, and personally in terms as friends,” Gredler said. “We’re all peers, and that’s totally independent of gender specifically, background or time in the lab.”

Whether in spite of, or because of, its composition the Cohn Lab is one of the more prolific at the University of Florida. Six of the graduate students, and all of the post-docs, received competitive fellowships from NIH, NSF or HHMI, and the researchers routinely have papers published in prestigious journals such as Nature, Proceedings of the National Academy of Sciences, and Development.

Larkins received a NIH K01 Mentored Research Scientist Development Award during the spring of 2015, and leads her own small group within Cohn’s lab.

“I really like being surrounded by creative people, people who think differently to the way I think– people who add different perspectives and approaches to problems,” Cohn said. “That makes me better and the whole research endeavor better.”

Words and photos by Ellison Langford