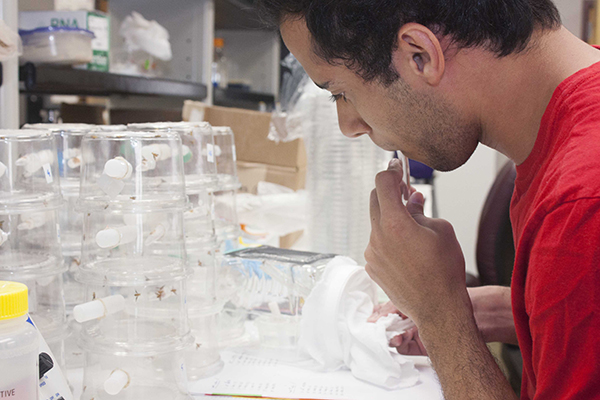 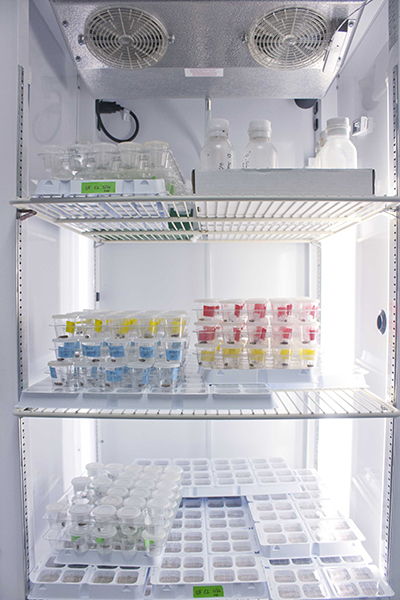 No one wants more bugs.

Except, perhaps, insect enthusiasts, like Daniel Hahn, associate professor in the department of entomology and nematology, and Genetics Institute faculty member.

But, regardless of your personal preference, bugs are essential to maintaining life on Earth. Bees pollinate the plants that become our food. Beetles break down and recycle organic matter. Ladybugs eat other insects that feed on many plants humans eat.

Increasingly, climate change is altering how many insects complete their life cycles. This is the focus of Hahn’s research.

“The purpose of our work is two-fold,” he said, “understanding the potential for organisms to react to climate change. And trying to identify the genetic and physiological mechanisms that make them more or less susceptible to climate change.”

Even though it’s often referred to as “global warming,” climate change encompasses much more than the gradual increase of global temperatures. Patterns of rainfall and seasonal storms have become more erratic. Meanwhile, phenomena related to “weather,” meaning seasonal trends in temperature and rainfall, continue. So, while winters are becoming gradually warmer each year, severe cold fronts and heavy snowfall still occur.

During the winter, many insects enter a dormant state called “diapause” similar to a bear’s hibernation. Prior to diapause, they have to make sure they stock up enough energy to get them through the winter. This means insects timing their activity so that they don’t go into diapause so early they run out of food stores before it gets warm, or so late that they are killed by the first cold snap.

How does climate change affect this?

Insects are ectotherms. Like reptiles, their body temperature is strongly influenced by the temperature of their environments. As winter temperatures rise, insects’ metabolic rates increase, and they expend more and more energy keeping themselves alive during diapause. This puts them at a greater risk of depleting their energy stores, and dying before spring. Warmer fall temperatures also interfere with insects’ ability to time their entry into diapause.

Hahn studies what he refers to as “seasonal shoulders,” meaning those times in the fall and spring when unseasonal warm or cold snaps are more likely to occur. He and his team study what genetic predispositions enable certain species to survive sudden changes in weather better than others.

By “winners” and “losers,” Hahn refers to the effect climate change will have on certain species in the future. With certain insects spending more time awake, they will be able to undergo more reproduction cycles. Whereas, in the past, a certain species of insect may have had 10 generations per year, now they may have time to produce 12.

Some species will become more abundant because of their increased capacity to reproduce, such as the yellow fever mosquito. However, others will not be so lucky. Hahn predicts certain species of butterflies and native bees that serve as pollinators may shrink in numbers, and experience shorter active periods as a result of climate-related stress.

“Timing is critical,” Hahn said. “What this means is that changes in diapause may allow insects to emerge earlier in the spring and become even worse pests.”