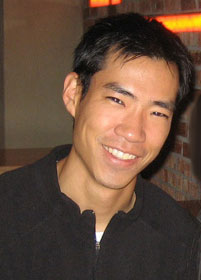 Butterflies and moths make up one of the most diverse order of insects on earth, the Lepidoptera order, which includes more than 150,000 described species worldwide, and up to five times as many that remain undescribed.

Akito Kawahara, a member of the University of Florida Genetics Institute and assistant professor at the Florida Museum of National History, investigates the evolution and genetics of these diverse species through collaborations with local, national and international researchers.

His lifelong interest in studying butterflies began at the age of four, when Kawahara says he began collecting them. After earning a bachelor’s degree in entomology from Cornell University, he continued his education at the University of Maryland, receiving both a master’s of science and doctorate in entomology.

The Kawahara Lab integrates many approaches in its research, including phylogenetic, behavioral, functional genomic and biodiversity informatics to study the evolution of butterflies and moths. Currently, Kawahara is especially interested in understanding the genetics underlying anti-predator behavior defenses the species use against bats and other predators.

In a study published in November and featured on the cover of the journal Science, Kawahara was one of more than 100 researchers from 10 countries that reconstructed the insect tree of life, discovering that insects originated at the same time as the earliest terrestrial plants – about 480 million years ago. The study not only advances understanding of insect origins, but also helps solidify the organization of groups.

In August, his team of UF researchers used large-scale, next-generation DNA Sequencing to trace nearly 3,000 genes to the earliest common ancestors of butterflies and moths, creating a “Tree of Lepidoptera” and changing scientists’ understanding of butterfly evolution.

University of Florida researcher collaborations and facilities, such as those used in creating the “Tree of Lepidoptera,” play an important role in Kawahara’s research.

Genetics research at UF is diverse with lots of opportunities to collaborate and use state-of-the-art genetics resources, said Kawahara.

Although strides have been made in the study of butterflies and moths, there is much that researchers have yet to learn.

“We are just at the start of understanding the genetic mechanisms underlying insect behavior in non-model groups,” said Kawahara. “With new genetic sequencing methods and approaches, it is very exciting to think about the prospect of what the field will be like in 10 to 20 years.”