Chris Williams, the current Assistant Director of Administration for the UF Genetics Institute is retiring after 5 years with the institute and an impressive 20-year career working for the University. Williams reflected on her time at UFGI and all of the great memories she’s made throughout her career. 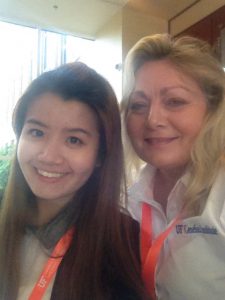 A Lawtey Florida, native, Williams began her career at the age of 16. Williams would commute one hour back and forth between Lawtey and Gainesville for work until moving to Gainesville permanently at the age of 22. Williams has lived and worked in Florida her entire life. She has worked for several organizations over the years and never had any desire to leave the Sunshine State.

“I’m a Floridian all the way,” Williams said.

Though Williams has worked for many places and other UF departments, UFGI holds a special place in her heart, she said.

“The best part about working at UFGI has been the atmosphere and the people I’ve worked with,” Williams said. “I can honestly say that this is the best place I’ve worked in my 36-year career. Although, I did meet my husband at the Sherriff’s office so that’s a plus.” 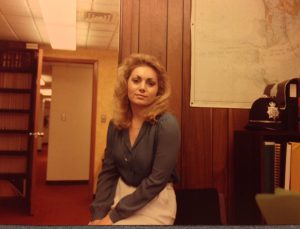 Chris pictured at the Sheriff’s Office in 1985

Chris met her now husband when she was 17 years old has been married for 25 years. They have 5 children and 8 grandchildren.

Williams began her career working for the Alachua County Sherriff’s office at the age of 17 and she worked there for 16 years. While working there she gained experience in several departments such as the criminal records division, internal affairs and crime prevention.

Williams went on to work for UF and has worked in the Internal Medicine Office, the Chief Financial Office, the College of Liberal Arts & Sciences and UFGI.

Chris plans to use her free time in her retirement to give back to the community and pick up some of her old hobbies such as playing the piano and sewing.

Chris has played the piano for most of her life and plans to play for nursing homes. She also has set up a sewing room in her house and plans to sew things like blankets for babies in hospitals and bibs for aged veterans. 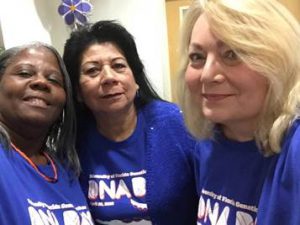 Williams will be missed dearly by the UFGI faculty and staff and has made significant contributions during her time here.

“Chris brought energy and a wealth of experience at the University of Florida to the Genetics Institute as our first Assistant Director for Administration,” UFGI Director Dr. Concannon said.  “She has made significant contributions to the administration of the Genetics Institute, allowing us to function efficiently in support of the faculty, students and staff of the institute. Her contributions will be greatly missed, and we wish her the best in her upcoming retirement.”